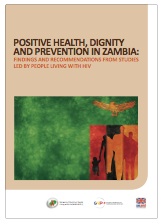 Zambia is one of the more urbanised countries of sub-Saharan Africa with a high rate of population growth. The country has ten provinces that are subdivided into ninety-ﬁve districts. Within the districts, the administrative units are Chiefdoms and Constituencies and the latter is made up of Wards.

The HIV prevalence among adults 15-49 years was 14.3% in 2007. Prevalence varies across regions, ranging from 7% in North-Western province to 22% in Lusaka province. The prevalence was about twice as high in urban (20%) than in rural areas (10%). In Zambia, HIV disproportionately affects more women than men, with women constituting 57% of the 1.2 million adults est mated to be living with HIV (UNAIDS, 2008). Women aged 20-24 are 2.3 times more likely to be HIV-positive than men of the same age group (Central Statistical Office, CSO, 2008).

Progress Since 2005, with support of development partners, the Government has provided free anti retroviral therapy (ART) in all public health insƟ tuƟ ons. The proportion of people who are both eligible for and able to access ART has increased from 38.9% in 2007 to 68% in 2009 (NAC, 2010). Over the years, the number of public and private facilitates providing ART related services such as CD4 counts has increased, resulting in improved services in both rural and urban areas. According to the 2009 Zambia Sexual Behaviour Survey,2 levels of HIV-related stigma and discrimination have in general been declining since 2005. Modest positive changes have been observed in proxy indicators to measure the level of stigma and discrimination (CSO, 2010).

Among children born to mothers living with HIV, the percentage of infants contracting HIV reduced from about a peak of 7.72 per cent in 1997 to about 1.99 per cent in 2011 because of the reduction of HIV infection among pregnant women and the prophylaxes administered to women living with HIV in the prevention of vertical transmission. National coverage for this programme in 2011 at about 80 per cent was approaching near universal levels.

The report also summarised challenges remaining: There are still sub-optimal numbers of children accessing ART, due to challenges in relation to the availability of infant diagnostic tests. Although the percentage living with HIV reduced among all the groups by sex and area of residence, it increased among men 15-49 years in rural areas from 8.9 per cent in 2001-2001 to 11.0 per cent in 2007. In fact, the gains in rural areas where the level of the epidemic can be said to be about half of that in urban areas were modest. Although the level of the epidemic in rural areas is much lower than in urban areas, the population affected is quite high since about 65 percent of the population lives there.