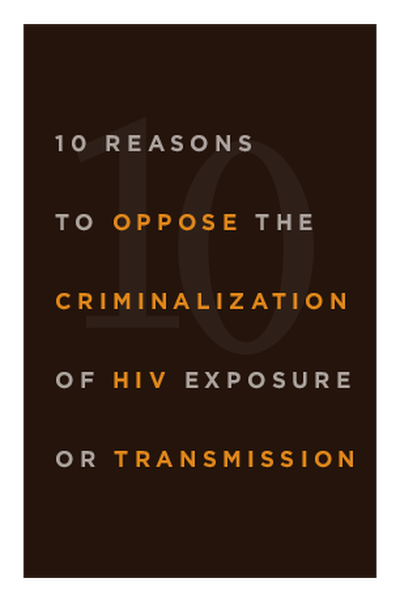 The push to apply criminal law to HIV exposure and transmission is often driven by the wish to respond to serious concerns about the ongoing rapid spread of HIV inmany countries, coupled by what is perceived to be a failure of existing HIV prevention efforts. These concerns are legitimate. Recently, particularly in Africa, some groups have begun to advocate for criminalization in response to the serious phenomenon of women being infected with HIV through sexual violence or by partners who do not reveal their HIV diagnoses to them. While these issues must be urgently addressed, a closer analysis of the complex issues raised by criminalization of HIV exposure or transmission reveals that criminalization is unlikely to prevent new infections or reduce women’s vulnerability to HIV. In fact, it may harm women rather than assist them, and negatively impact both public health and human rights.

This document provides ten reasons why criminalizing HIV exposure or transmission is generally an unjust and ineffective public policy. The obvious exception involves cases where individuals purposely or maliciously transmit HIV with the intent to harm others. In these rare cases, existing criminal laws can and should be used. In addition, governments should effectively prosecute all cases of sexual violence and ensure that rape in marriage is recognized as a crime. However, for cases in which individuals living with HIV do not act with the specific intention to harm others, countries should not criminalize HIV exposure or transmission. Instead, they should take positive steps to increase evidence-based HIV prevention and treatment efforts and reduce women’s vulnerability to HIV.