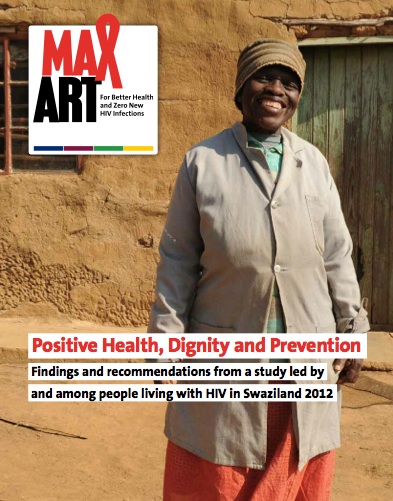 Positive Health, Dignity and Prevention. Findings and recommendations from a study led by and among people living with HIV in Swaziland 2012

At 26% Swaziland’s HIV prevalence is the highest among adults in the world (UNAIDS, 2010). An estimated 210,000 people of all ages are living with HIV in Swaziland. The increasing availability of HIV treatment has enabled people living with HIV (PLHIV) to live longer, healthier lives, and to engage in issues that directly impact on their lives and those of their partners, families and communities. In 2011, the Dutch Postcode Lottery funded a proposal submitted by STOP AIDS NOW! and the MaxART consortium, whose primary objective was to maximize access to antiretroviral treatment (ART) in Swaziland. The scale up in access to, and uptake of, HIV testing and treatment has set the stage for an implementation study to put into practice the exciting new evidence that HIV treatment can also serve as a means of prevention. One of the components of the project was the documentation of the needs and realities of PLHIV in Swaziland, in the context of the national scale-up of access to ART. This helped to continuously improve and develop evidence informed activities.

To this end, MaxART partner organization Swaziland National Network of People Living with HIV and AIDS (SWANNEPHA), with support from the Global Network of People Living with HIV (GNP+), conducted a cross-sectional survey among PLHIV to document their experiences in relation to Positive Health, Dignity and Prevention (PHDP) which promotes holistic health and wellness, including human rights, legal protections, policy environment free of stigma and discrimination for PLHIV as well as access to HIV treatment, care and support services and by doing so contributes to the health and wellbeing of their partners, families and communities. A total of 919 people were reached from the four regions of Swaziland with the support of expert clients who are also people living with HIV.

This report presents the findings of the PHDP survey and it describes the experiences of PLHIV in the context of the national scale up of HIV testing, care and treatment with highlights of the important linkages between prevention, treatment, care, support and human rights. This will go a long way to inform evidence based PHDP programming. The findings of the study were analyzed in relation to the following PHDP components: empowerment, gender equality, health promotion and access, human rights, prevention of new infections, sexual and reproductive health and rights, and social and economic support.