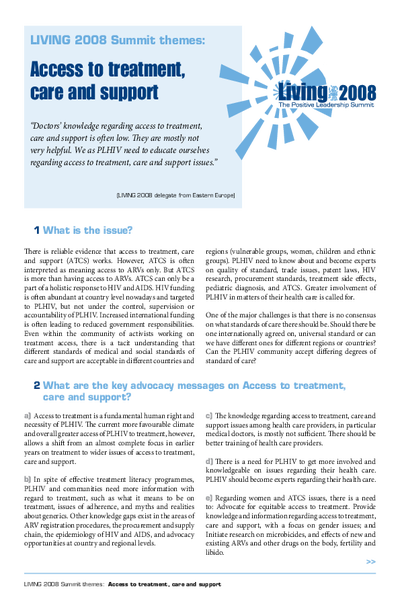 There is reliable evidence that access to treatment, care and support (ACTS) works. However, ACTS is often interpreted as meaning access to ARVs only. But ACTS is more than having access to ARVs. ACTS can only be a part of a holistic response to HIV and AIDS. HIV funding is often abundant at country level nowadays and targeted to PLHIV, but not under the control, supervision or accountability of PLHIV. Increased international funding is often leading to reduced government responsibilities. One of the major challenges is that there is no consensus on what standards of care there should be. Should there be one internationally agreed on, universal standard or can we have different ones for different regions or countries? Can the PLHIV community accept differing degrees of standard of care? These and other questions were discussed during the LIVING 2008 Summit, and resulted in this working group statement.