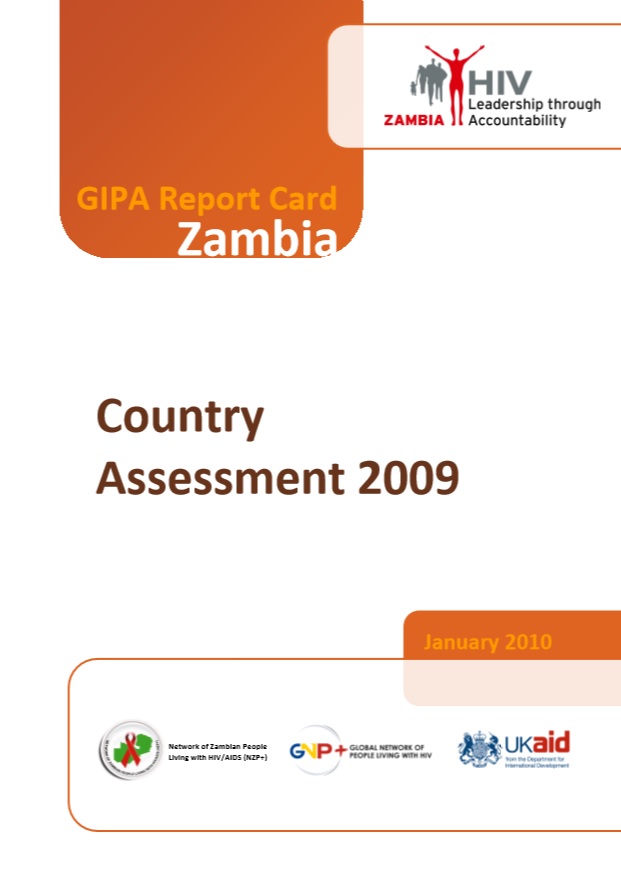 The Network of Zambian People Living with HIV/AIDS  (NZP+) would like to thank the respondents for enriching this report with their thoughts and experiences. In spite of the many demands on their time,  they made themselves available to participate in this study.

Representatives were interviewed from 29 organisations active in the HIV and AIDS response in Zambia. Some were PLHIV, some professionals working on HIV and AIDS, and some were both. The GIPA Report Card was developed to assess the level and type of involvement of PLHIV in the current response, with a view to informing future efforts to increase their meaningful involvement in future programming.

This report was produced as part of  HIV Leadership through Accountability programme, which ran for five years, from 2009 to 2013

It was spearheaded Global Network of People Living with HIV (GNP+) and the World AIDS Campaign (WAC), and funded by the Department for International Development (DfID), to create evidence-based campaigning, advocacy and lobbying for and by people living with HIV. Research was carried out to inform and strengthen national, regional and international advocacy, and was implemented with a bottom-up approach, informed by community responses, and strengthened by South-South collaboration.

The countries where the programme was implemented were: Cameroon, Ethiopia,  Kenya, Malawi, Moldova, Nigeria, Senegal, South Africa, Tanzania and Zambia.

More information and background materials can be found  at http://www.hivleadership.org/ which is the archive site for the programme