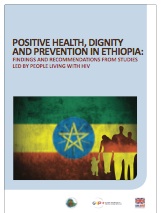 Ethiopia is the second most populous country in Africa. The country has nine Regional States and two City Administrations. These are subdivided into over 800 administrative woredas (districts), which are further divided into kebeles, the smallest administrative unit. Ethiopia is one of the countries with the lowest per capita income, estimated at 390 USD per annum and over a third of the population live below the absolute poverty line. Nevertheless, it has one of fastest growing economies among non- oil producing countries in sub-Saharan Africa. In recent years, the country has seen rapid progress in economic growth, expansion of social infrastructure, and in improving healthcare.

The epidemic
With an estimated adult prevalence of 1.5%, Ethiopia has a large number of people living with HIV (approximately 800,000) and about 1 million children orphaned by AIDS  There is wide variation in HIV prevalence among administrative regions, and between urban and rural settings as conﬁrmed by Demographic Health Survey (DHS) 2011: urban adult HIV prevalence was 4.2% (women 5.2%, men 2.9%) while rural adult HIV prevalence was 0.6% (women 0.8%, men 0.5%).

The 2012 Country Progress Report published by the Government of Ethiopia summarises the progress made and challenges remaining in its current response.