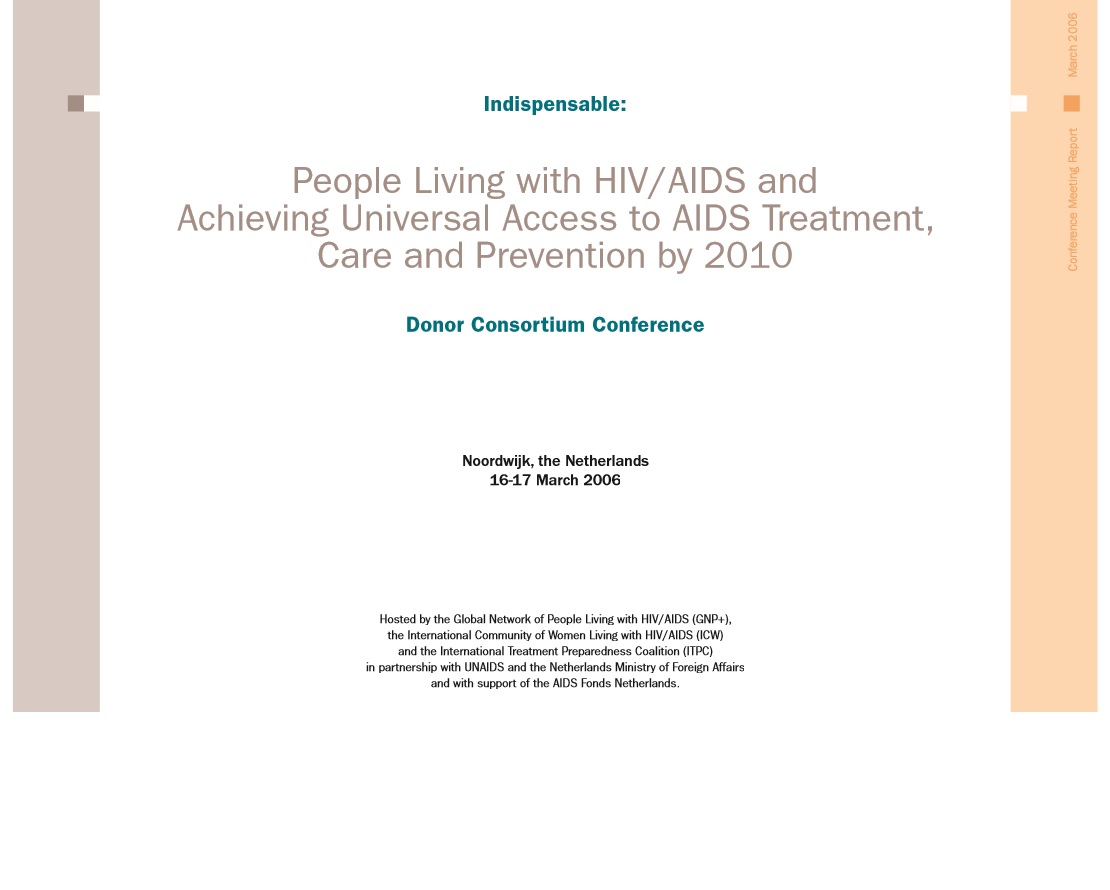 The Donor Consortium Conference, held 16-17 March 2006 in Noordwijk, the Netherlands, was organized and hosted by GNP+ in partnership with UNAIDS and the Netherlands Ministry of Foreign Affairs and with support from AIDS Fonds Netherlands. It was structured primarily to broaden donor awareness of the activities of three key organisations run by and for people living with HIV/AIDS (PLWHA): GNP+, the International Community of Women living with HIV/AIDS (ICW), and the International Treatment Preparedness Coalition (ITPC).

More than 50 people from some 20 countries attended the meeting, which featured an opening address by UNAIDS Executive Director Peter Piot. Attendees included PLWHA working with GNP+, ICW, ITPC and their afﬁ liated networks; other HIV treatment and prevention advocates; and representatives from donor entities across the bilateral, multilateral, and for-proﬁt spec-trums.

The overall goal of the meeting was two-fold:
1) to identify and remove obstacles limiting donors’ understanding of the extensive – and growing – role of the three organizations in addressing issues of importance to PLWHA around the world; and
2) to provide donors with an opportunity to outline their funding priorities and objectives in regard to HIV/AIDS issues, notably those associated directly with PLWHA networks and community groups. During and after a series of presentations about the organizations, discussion focused on the following areas:

• the challenges that the PLWHA movement faces and how these might best be met;
• the level and kind of support, ﬁ nancial and otherwise, that might enable PLWHA organizations to continue and improve their outreach and advocacy efforts; • potential strategies to create consistent and sustainable partnerships among PLWHA organi- zations and donors; and
• the future roles and responsibilities of all partners involved in shaping a meaningful global response to HIV/AIDS.
In general, participants agreed that as PLWHA organisations become more assertive and knowledgeable about donors’ expectations and interests, they will in turn beneﬁt greatly from donors’ increasingly proactive engagement. The dialogue initiated at the Noordwijk meeting marks the start of a vital process and potentially heralds new thinking about goals and partnerships involving all entities focusing on HIV/AIDS issues.
This report is not intended to provide in-depth coverage of the entire conference. Instead, it summarizes the following: • key issues and concerns raised during presentations by representatives from PLWHA organizations, including GNP+, ICW, ITPC and the Collaborative Fund for HIV Treatment Preparedness; • key issues and concerns raised by donors, especially in terms of what they need from PLWHA organisations in the future to increase the likelihood of extensive, sustainable support; and • proposed action steps, both short- and longer-term, to build on the momentum established at this initial gathering. Participants agreed to establish a working
group to set a preliminary timeline and to recommend concrete steps and policies to move the process forward.