30 November 2022
By Communication Team
ALL NEWS 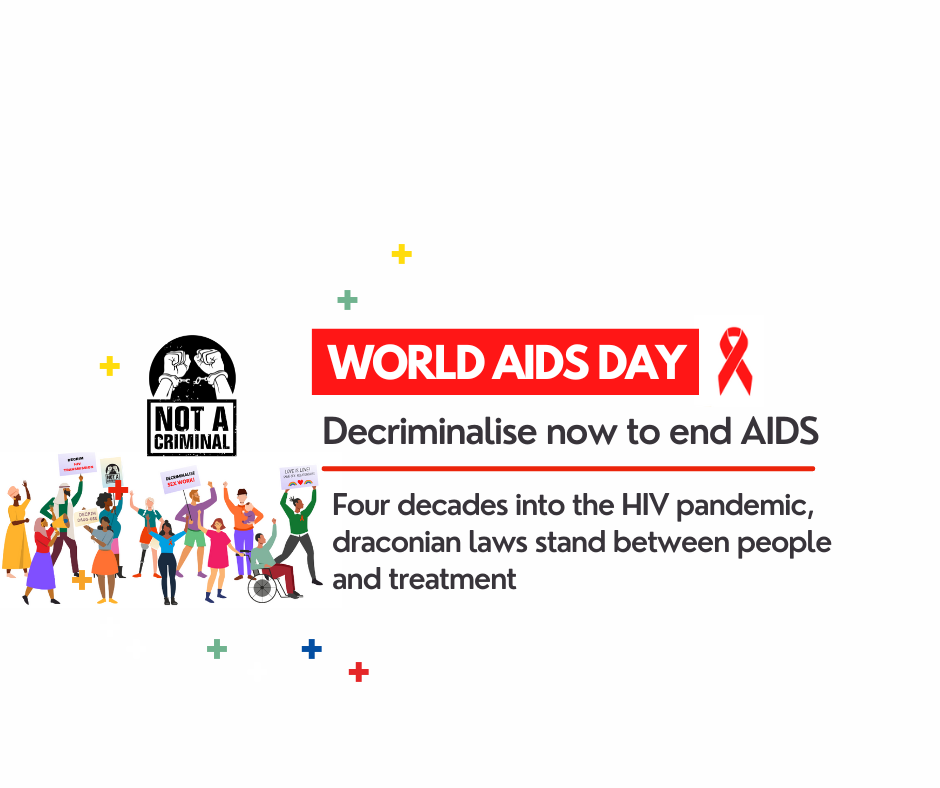 Four decades into the HIV pandemic, draconian laws stand between people and treatment

1 December 2022 — Today, people living with HIV and key populations are criminalised in some form in nearly every country in the world — putting them at increased risk of violence and restricting their access to healthcare.

UNAIDS’ recent “In Danger” report shows that 134 countries criminalise HIV transmission, non-disclosure of or exposure to HIV — at least two dozen other countries allow for prosecutions under other laws. Similarly, in nearly 40% of countries, being in a same-sex relationship is either partially (24) or completely (39) illegal.

Almost 90% of nations globally criminalise drug use in full, according to a 2021 international review.

From the 211 countries and dependencies mapped by the Global Network of Sex Work Projects (NSWP)’ Global Mapping of Sex Work Laws, 193 criminalise one or more aspect of sex work . A further 15 countries and dependent territories have a system of legalisation, where sex work has been legalised by introducing restrictive laws/regulations to control the sex industry. In these countries, many sex workers remain criminalised because of the creation of a two-tier system of legalised/regulated sex work and illegal sex work.

Criminalisation increases the risk of HIV infection among key populations, such as young women; gay, bisexual and other men who have sex with men (gbMSM); people who use drugs and sex workers. Key populations are up to 36 times more likely to acquire HIV compared to the general population, according to 2021 UNAIDS figures.

Meanwhile, access to HIV prevention services for key populations, including pre-exposure prophylaxis (PrEP), remains low or — in the case of transgender people in Africa — non-existent. Similarly, harm reduction services, or services to reduce the negative consequences of drug use, remain scarce.

“Bad laws don’t protect people,” says the Global Network of People Living with HIV’s (GNP+) Florence Riako Anam, the programme manager for Love Alliance. The Love Alliance works to improve the health and rights of marginalised people who are most affected by HIV.

“Instead, decades of evidence show the criminalisation of people living with HIV and Key Populations makes them targets for violence — and the virus — while putting prevention, care and support out of reach,” she continues.

Criminalisation can be deadly for women and their children

“Women are more likely to be the first within their relationship to discover they have HIV, usually due to HIV testing in the antenatal setting” explains Charity T. Mkona, chairperson of the International Community of Women Living with HIV (ICW). “As a result, women face blame for ‘bringing HIV into the relationship’ even as these women may be experiencing violence or be unable to negotiate safe sex.” Women living with HIV experiencing violence may face physical and emotional violence, displacement and other economic impacts. Criminalisation can become one more tool of the abuser.

Worryingly we are seeing a wave of criminalisation particularly of mothers living with HIV with regards to breastfeeding despite long-standing evidence about the health benefits of breastfeeding for children and increasing scientific evidence that for people effectively utilising antiretroviral treatment, breastfeeding — or chestfeeding — poses a low risk of transmission.

Criminalisation of transmission is  counterproductive, reducing help-seeking avenues for women living with HIV who are experiencing violence,  while increasing barriers to healthcare and women’s vulnerability to power and control tactics utilised by abusive partners.

We are not criminals

At the International AIDS Conference in July, the  Global Network of People Living with HIV (GNP+) launched the  “Not A Criminal Campaign” to decriminalise HIV non-disclosure, exposure and transmission; same-sex relationships; sex work and drug use. The “Not a Criminal” campaign is a partnership between GNP+, HIV Justice Network, Y+ Global, the International Community of Women Living with HIV (ICW), NSWP, INPUD, Global Action for Trans Equality (GATE) and Global Action for Gay Men’s Health and Rights (MPact).

As part of the “Not A Criminal” Campaign, we demand countries replace laws that are barriers to HIV prevention and treatment with evidence-based legislation to protect our communities from criminalisation, discrimination and gender-based violence and support the creation of independent human rights institutions. Additionally, the campaign calls on United Nations agencies and donors to develop strong, coordinated, and high-profile mechanisms to monitor progress on these member states’ commitments.

“Every day, young people in all our diversity are criminalized because of our health status and sexuality, and denied our inherent rights as human beings,” Tinashe Rufurwadzo, director of programmes, management and governance at the Global Network of Young People Living with HIV (Y+ Global). “Our leaders are silent, and our national policies are ignorant and negligent of our needs.”

People who are criminalised are more likely to acquire HIV because criminalisation makes them less able to access health services to prevent HIV infection. For this same reason, they are also less likely to know their HIV status, be on treatment or be virally undetectable. When people are virally undetectable, HIV treatment has lowered the level of the virus in their blood to levels so low that they can no longer transmit HIV.

But we also know that decriminalisation can be a powerful tool to empower communities and reverse inequalities. For example, decriminalising sex work could avert between a third and almost half of all new HIV infections globally among workers and their clients, found a 2014 study published in The Lancet.

Meanwhile,nearly two dozen of the world’s leading HIV scientists and major United Nations agencies like UNAIDS have already called on countries to repeal the regressive criminalisation of HIV. UNAIDS also supports the decriminalisation of drugs for personal use.

The world continues to miss global targets to end AIDS

Although 81% of people knew their HIV status as of 2020, only 67% were on treatment and even less (59%) were virally suppressed. Inequalities persist among key populations and extend to children living with HIV, only about half of whom were on treatment, shows UNAIDS’ latest global report.

Yet, the world continues to witness the slow adoption of global commitments to address stigma, discrimination, criminalisation, and violence for people living with HIV, Key and vulnerable populations worldwide.

“Four decades into the HIV pandemic, the evidence is crystal clear: Countries with regressive laws have poorer HIV programme outcomes,” Anam says.. “Bad laws” continue to fuel the inequalities that prevent the world from ending the AIDS pandemic. The time to act for a more equitable future is now.”

To support our calls for decriminalisation and receive alerts about the Not a Criminal campaign, sign up for alerts from GNP+