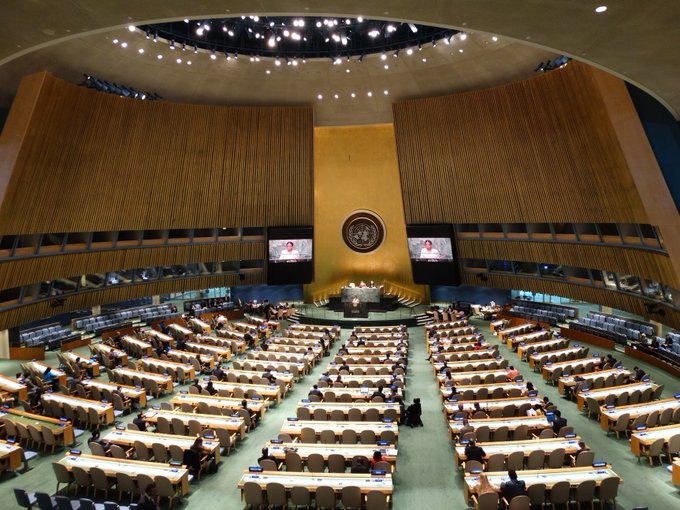 The Multi-Stakeholder Task Force welcomes the adoption today by the United Nations General Assembly of the 2021 Political Declaration on HIV and AIDS.

Four decades after the US Centers for Disease Control and Prevention (CDC) reported the first known cases of HIV/AIDS in its historic report of June 5 1981, the 2021 Political Declaration on HIV/AIDS represents a transformational moment in the global AIDS response. Communities and civil society voices calling to get back on track to end AIDS by 2030 through supporting a fully funded, human rights- and evidence-based response have been heard by the global community.

We affirm the progress represented by the Political Declaration, even as we are disappointed by some critical omissions and weaknesses. We pledge our action and vigilance to ensure that these are addressed as the work of moving towards an AIDS-free world continues.

Unsurprisingly, the process leading to this week’s High-Level Meeting on HIV/AIDS and the new Political Declaration has exposed once again the conflicting views of UN member states on equality, human rights and the inclusion of key populations – sex workers, gay, bisexual and other men who have sex with men, transgender people, people who use drugs, and people in prison and other closed settings – along with women and girls, and youth. It has also exposed conflicts over intellectual property barriers to lifesaving medicines.

At this High-Level Meeting, however, for the first time in UN history, such a resolution was adopted by voting, at the request of the Russian Federation, which broke the consensus on issues related to human rights, harm reduction and law reform. Of all the votes cast, 165 member states voted for and four against, i.e. the Russian Federation, Belarus, Nicaragua and the Syrian Arab Republic. In so doing, they have deliberately undermined the global consensus on the approach needed to end AIDS as a public health threat by 2030.

Reaching consensus was a painful process which will cost lives as humane and scientifically proven interventions regarding sexual and reproductive health and rights (SRHR), comprehensive sexuality education, harm reduction, sexual orientation and gender identity, community leadership, decriminalisation and repealing punitive laws, as well as TRIPS waivers to make essential medical technologies and innovations more equitable available, were aggressively opposed by some member states. Most of these crucial areas were either diluted to a point where commitments become toothless, or completely removed from the text during negotiations over the Political Declaration.

No fewer than 73 concessions were made to Russia during negotiations to build a consensus document. Russia’s refusal to accept the painstakingly negotiated consensus and its decision today to force a vote on the Political Declaration represents an attempt to undermine the outcome of the High-Level Meeting on AIDS and an evidence- and rights-based global AIDS response.

Nevertheless, there is much to welcome in the Political Declaration. We are glad that key populations are at least named within it, despite the opposition of some member states that led to watered-down wording allowing countries to define which populations are at the centre of their response. Key populations have been at the heart of community-led responses to HIV for 40 years. Their continued leadership, along with the leadership of other vulnerable populations – women, adolescents and young people, Indigenous peoples, and people with disabilities – is essential and deserves greater recognition. We are concerned that by invoking national legislation, the Political Declaration may enable member states to ignore relevant global and national data when defining key and vulnerable populations for their own countries, and it gives them too much leeway to avoid reforming punitive legislation that holds back an effective HIV response.

Despite these losses and other limitations related to national sovereignty clauses, the Political Declaration on HIV/AIDS adopted today by UN member states broadly aligns with the priorities of the new Global AIDS Strategy and highlights the urgent need to address the structural barriers of discrimination, gender inequality, criminalisation, underfunding and exclusion of people living with HIV, key populations and other priority populations vulnerable to HIV, including migrants and people in conflict zones and humanitarian settings.

For the first time ever, transformative and measurable targets on programmes that can make the end of AIDS a reality are part of the Political Declaration on HIV/AIDS adopted by the UN General Assembly.

One of the most important wins is the inclusion of the 10-10-10 targets on societal enablers, calling for member states to end all inequalities faced by people living with HIV, key and other priority populations by 2025, by reducing to 10% or less the proportion of:

Equally critical is the commitment to support community leadership and ensure that an increased proportion of HIV services are community-led, particularly testing and treatment services, key population HIV prevention programmes, and programmes to support the achievement of societal enablers.

Particularly welcome also are the commitments to eliminate vertical transmission of HIV and end pediatric AIDS by 2025, as well as to the 95-95-95 targets for testing: 95% of people living with HIV knowing their HIV status; 95% of people who know their status on treatment; and 95% of people on treatment having a suppressed viral load.

Because none of these commitments means much without financing, the Multi-Stakeholder Task Force welcomes the commitment to fully fund the AIDS response, notably by enhancing global solidarity to meet the target of 0.7% of gross national income as development aid, and increasing annual HIV investments in low- and middle-income countries to US$29 billion by 2025.

Governments, donors, technical partners, the private sector and communities and civil society must now align efforts – and translate global commitments into local action. We must focus our work on the transformative elements of the Global AIDS Strategy endorsed by UN member states: strong political leadership, adequate funding, including for community-led responses, human rights-based and multisectoral approaches, and the use of scientific evidence to guide HIV responses and strategies.

These efforts will include work on issues that the Political Declaration does not address adequately, or at all – because it is on these issues too that the HIV response will stand or fall. Community-led responses – by key populations, women, adolescents and young people, and all other vulnerable communities – will continue to be at the heart of the struggle to end AIDS by 2030. We will argue for the reform of laws that criminalize and punish key populations. We will advocate for fully funded, community-led harm reduction programmes. We will push for the rights and needs of Indigenous peoples, people with disabilities, and migrants to be properly addressed. We will advocate for comprehensive sexuality education that enables adolescents and young people to live fulfilling lives, and sexual and reproductive health services for them and for adults. We will campaign for the proper recognition of sexual orientation and gender identity. And we will push for TRIPS flexibilities that will make medicines and technologies for prevention, diagnosis and treatment of disease available, accessible and affordable to all.

The annual review of progress in delivering on the Political Declaration – and the 2026 High-Level Meeting on HIV/AIDS itself – are important mechanisms for communities, civil society and parliaments to hold our governments to account. We must keep track of progress on the 2025 targets and the other commitments made in the new Political Declaration, and course-correct rapidly when gaps or challenges emerge.

The stakes are high: in four decades, the epidemic has cost the world over 75 million HIV infections and 32 million lives lost. The task of accountability is ours to realise! It is one we intend to fulfill, empowered by the resilience, experience, and expertise of the communities most directly affected by HIV, and knowing that the 2021 Political Declaration puts the world on the path towards the global goal of ending AIDS by 2030.