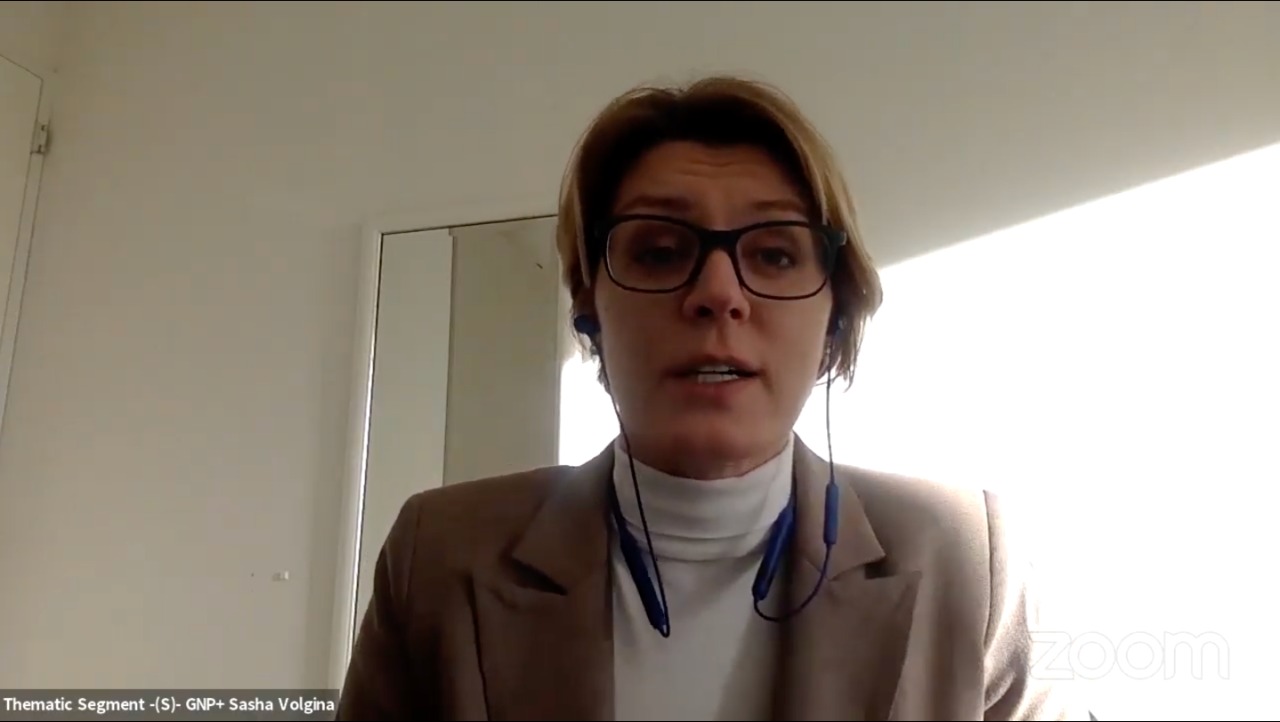 Alexandra (Sasha) Volgina, a woman living with HIV and cervical cancer survivor, who is currently the GNP+ program manager and former Europe PCB NGO Delegate (2015-2016), delivered a keynote address for the 47th PCB Thematic Segment.I am 41 years old, 20 years of which I live with HIV. I was born and the majority of my life lived in Russia, being an activist from 2002. In 2012, I moved to Ukraine, where I have started to work on the regional level. I represented Europe region in PCB NGO Delegation for 2015-2016. Currently, I work for GNP+, where among other projects, I am coordinating community engagement into Global Partnership to Eliminate Stigma and Discrimination.

The level of awareness among HIV positive women is very low – I myself being an activist, founder and then Executive Director of All Russian Network of Women affected by HIV EVA, – I knew that having HPV wasn’t good for me, and that chances for HIV positive women to develop cervical cancer are higher. But that’s all I knew – I had no idea of what can be done, how it can be prevented. Years of living with HIV in EECA taught me a lot. I have developed a scope of rules: be ready for discrimination manifestations every second; don’t trust the system; don’t go to the doctors outside the AIDS centers – special parallel medical system for HIV positive patient in fact duplicating the one for “normal” people; be super patient; pray; fight for your rights, and you should know better about your health conditions rather than your doctor. Also, the medical system has ignored me, pushed me out, and was designed in a way that was not answering my needs. I have developed these skills and perspectives in order to survive.

When I moved to Netherlands to work for GNP+, I found out all that skills and rules are not needed anymore: zero stigma and discrimination; the medical system is slow, but it works; doctors are building with patients equal relationships instead of using paternalistic approach; etc.,. I was pretty shocked and honestly suspicious. I started to get letters which were asking me to go for screening for cervical cancer. I knew that it was actually a good idea, but was hesitating – my rules were saying don’t trust the system – go to peers, go to your community, know better than doctors do – to protect yourself. In my world, letters from the medical facility were a threatening sign. I have called one of my peers and friends in Ukraine, googled quite a lot on cervical cancer – got needed info – and went to the screening, right in time – thank god.

I was diagnosed and treated so quickly, that when I was going for surgery, I wasn’t even 100% sure what was going on. The reason I am alive and wasn’t really ill is so unfair: I have moved to the western world where Global Strategy towards eliminating cervical cancer as a global public health problem adopted by World Health Assembly in August 2020 is already implemented. But women with HIV who still live in Ukraine, or live in Africa – where we see the highest burden of the disease – are sentenced to develop cervical cancer and many of them will die. I can’t even describe what my feelings are, am I glad I am alive? Yes, don’t I have a feeling of guilt? Yes, I do, am I angry in that situation? VERY.

We have all the instruments on hand to change that situation. We have vaccines, we have new diagnostics approaches, we know that proper screening can save lives, and how to organize it effectively. But to implement all that we need, and there is nothing new in what I am saying, we need political will and commitment of member states, and funding, which is coming together. It is the same old story with the HIV epidemic, it is the same situation with COVID 19 developing behind our eyes and the same story for cervical cancer – the same challenges and same solutions! We need people’s vaccines for COVID…. and need affordable vaccines for HPV. We need affordable treatment and care.

We, people living with HIV, do remember the awful part of the HIV epidemic – with millions of people dying in Africa without access to life-saving treatment, while people in the West were already saved. I have experienced it myself – I have lost too many friends in 2000 – 2004 back in Russia, as the Government was denying the epidemic existed, not providing lifesaving ARVs – while the world outside Russia was using ARVs. Neglected disease. Quotation from the Association of Women living with HIV in Nigeria (ASWHAN ) “Cervical cancer has been neglected, in Nigeria .”Someone has to start — I am asking UNITAID to step up, it is the mandate of UNITAID to implement game-changing innovations. We need that for cervical cancer.

I am asking GF, who has played a catalytic role in Hepatitis – this disease is now killing way less of our HIV positive people than it did recently. Let’s save our women living with HIV. I am very inspired by the example of Kyrgyzstan and I call member states who are receiving GF funding to include new interventions around cervical cancer into country proposals, and I ask GF to step up and support it. We also need to work under affordability, with other stakeholders. We need MPP to go and try to get what is possible from pharmaceutical companies, Countries which won’t be included in MPP licenses – as we know too many won’t be there. Governments of those countries, do not hesitate to save the lives of your citizens, do not listen to those who are saying you are too radical.

The Doha declaration was done for those cases, TRIPS flexibilities were established exactly for that kind of situations. It is a national emergency situation in too many countries, please act. But getting affordable vaccines and treatment is not enough – we need to remember lessons learned: do not medicalise the response; engage communities; establish people-centered and differentiated approach; create demand; overcome fears and myths; combat stigma and discrimination; establish peer support; and, treatment literacy and awareness.

In reading the Background Note, I have noticed that there are troubles with demand, or retaining on treatment is complicated. These are bad signs that give an impression we are trying to make business as usual. We already know what works and what interventions are an essential part of public health even not being medical ones. This work to support medical interventions and community engagement gives us a unique mechanism of accountability and provides feedback to make sure that we are building the most efficient systems, that communities and civil society will notice gaps and will come advocating for changes. I will finish with quotations from ICW: WA – “Local and Regional HIV women network should be financial and technically funded to sensitize and refer its members for cervical cancer screening, treatment and other palliative measures.”I really hope that this Thematic segment will help us to save lives and build effective response for cervical cancer and HIV.